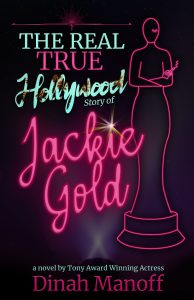 Jackie Gold is a tabloid cover girl with a walk-in closet full of secrets and a pack of bloodthirsty paparazzi snapping at her high-heels. From the hospital bed where she lies fighting for her life, Jackie narrates in flashbacks, while press and public speculate on everything from whether "Jackie's Jump!" was a suicide attempt, to whether or not her breasts are real. The novel switches back and forth from the life-or-death drama unfolding in the hospital and Jackie's reflections on her improbable show business upbringing and the events that led her to this moment in time.

When we meet Jackie she is at the peak of her career. She's been offered the role of a lifetime and her equally famous boyfriend is People's Sexiest Man of the Year. But her life takes an unexpected and terrible turn when the paparazzi storm her hotel room...

"...And not until my robe billows up over my head like a broken parachute do I realize I have missed the mark. I wish I could tell you that my life then went before me in slow motion, or that I thought of Brett, or my family, or even about how Nicole had betrayed me, but my last thought before striking the rocks was, Thank God I'm wearing nice underwear."

Jackie's journey is a coming of age in Hollywood, both treacherous and hilarious. A story of secrets revealed and relationships shattered and mended.